Posted at 07:52h in Uncategorized by rsetadmin 0 Comments
0 Likes 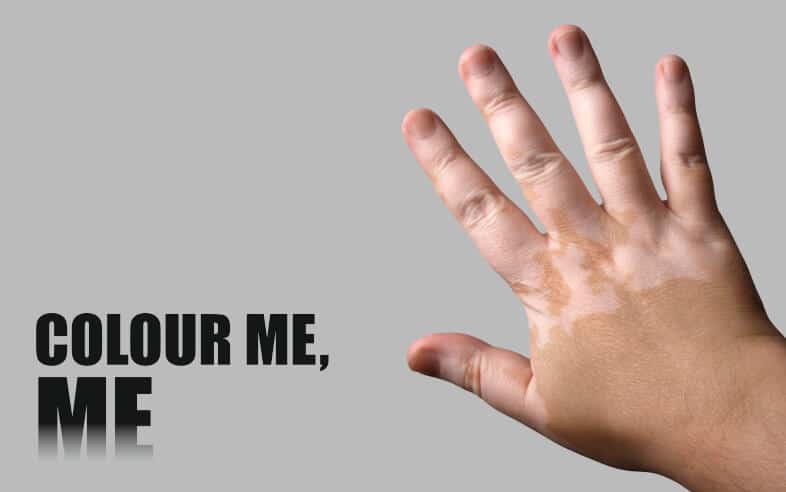 Skin colour. A tag that differentiates humans into races, castes, breeds. A hierarchy that dweels deeper than the core, it blooms in the child-mind.

Now, as the world progresses, racism is looked down upon. But everyone has their own clans you know? Even though we are friends with people of every culture now, we still deep down prefer people of our colour, our race.

And there nothing wrong in it. To form a clan of people who are like us. It’s natural actually.

In layman terms, it’s a non-communicable skin disorder, that alters some/full part of your skin to kill the cells that produce your natural skin colour. Hence, people with vitiligo, have light colour patches on their skin.

So let’s start with my story.

I have had vitiligo for more than 10 years now. So imagine an 8 year old child, finding out a spot of fair skin on her olive coloured one. Imagine her getting excited to become fair and beautiful in a society where skin colour is advertised more than No Smoking. Imagine that gullible child telling her parents about it and them taking her to various doctors. Imagine her confusion when her parents explain her that she has a disease. Imagine her explaining to all her friends, with the same innocent mind, why she has two different skin colours and adding at the end ‘ It does not spread on touching’.

Imagine her hiding behind clothes. Imagine her horror as the medicines she took, to get back her normal skin, has the opposite effect, and the beautiful canvas of her skin being ruined by white everywhere. Imagine her answering questions at the age of 10 that she herself doesn’t understand.

Imagine her being pampered by her amazing parents so that she doesn’t have to feel alone because of the loss of her friends. Imagine her in her early teens, being mocked by other teens for her skin colour. Imagine her learning to not listen to those comments and living a life where she is only recognized because of her academic excellence and not her personality, because no one wants to know her at a closer level. Imagine her always being left alone for people choosing other people over her, and her blaming it all on her disease weakened self-esteem. Imagine her trying to cut the white strands of her hair at the age of 12.

Imagine her starting to imagine her life alone with only a handful of people who won’t judge her for her looks, or try to persude her to dress a certain way, or eat certain food, or pray to a certain god. Imagine her trying to discover herself and failing miserably.

Imagine her stop using her medicines, her lotions after tedious years of torture, and trying to live with her own skin, without trying to change herself. Imagine her explaining these insecurities to her parents, who inspite of being her strongest shield from the world, want her to be normal. Imagine her going against everyone around her, just to feel normal.

Just imagine all of it. Put yourself in her shoes. Imagine the torture she put herself through, imagine the restrictions she put on herself.

Imagine the sigh if relief she takes when she openly answers people’s questions about her skin, without tearing up, with trying to hide, without feeling the need to run. Imagine her, laughing at herself, laughing with others at herself, and enjoying whatever jokes life throws her way.

Imagine her colouring her skin not in olive, brown, black, or white, but in quirks, in hobbies, in achievements, in shortcomings.

My story is not the only one. But maybe this story can be the first one to be told.

Colour me not, in my skin tone,

Colour me not, in my disease,

Where hardships come with ease.

Colour me, in colours,

Where I rejoice in happy slivers.

Colour me, in colours,

Where i can me my strongest pillars.

Colour me, in me,

Where i have sailed the sky and sea.

Colour me, in me,

Where I’m ready to be bound-free.

Learn How Our Counseling Services Can Help You.